Are you eating gluten-free or Paleo foods?  I just got into the Paleo diet.  You can read more about it in my previous post on How to Make Cauliflower Pizza Crust or Pie Crust (Paleo and Gluten Free).

If you want to learn more about the Paleo diet check out this book, which I’m reading now,  The Paleo Diet Revised: Lose Weight and Get Healthy by Eating the Foods You Were Designed to Eat.  Or you can find various Free Paleo Kindle Books too.

I was craving something sweet, so I decided to make a few changes to the cauliflower pizza crust recipe to change it into a cauliflower pie crust. 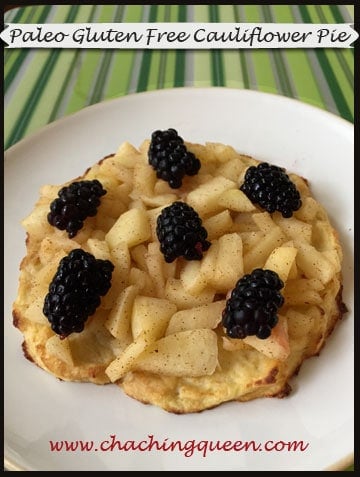 First, follow the first few steps (until the mixing of the dough) from the Cauliflower Pizza Crust recipe.

Now, to your rinsed and wrung out cauliflower add one egg, a pinch of salt, and little bit of sweetener.  I choose to add just a little bit of maple syrup, but you can choose Stevia, honey, or other types of sugar.

Flatten and shape the dough on a parchment paper-lined baking sheet. 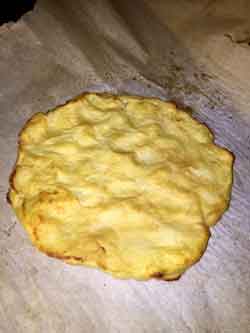 While this is baking, make your Paleo Gluten Free Cauliflower Pie Topping or Filling.

I choose to make the cinnamon apples from my Apple Cinnamon Yogurt Parfait Quinoa Morning Cup Recipe.  You have lots of options.  Just remember to soften the fruit some and try to use water rather than oil to sauté.

After 20 minutes of baking the crust, add your topping and place the pie back in the oven for another 5 – 10 minutes.

Here is a picture of my Paleo Gluten Free Cauliflower Pie with Cinnamon Apple topping.

It was surprisingly good. That’s why I’m sharing it with you.  🙂 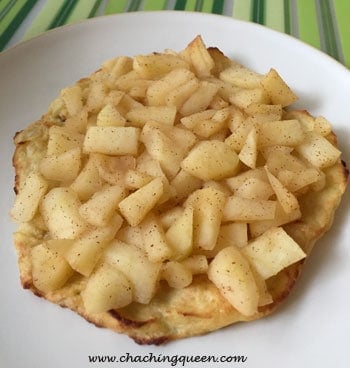 Even the cat thought the cauliflower pie looked tasty! 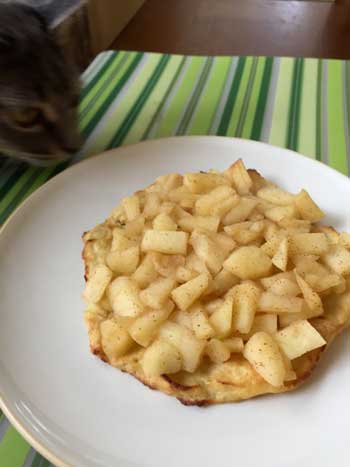