Pogo Pass is a membership that provides you with 12 months of FREE access to the best entertainment venues in San Antonio, Las Vegas, Phoenix, Tucson, Kansas City, Austin, Waco, Fort Worth, and Dallas (one pass per city).

You can get 50% off of a Pogo Pass by using promo code CHACHING at checkout, making it just $49.99 ($39.99 for Kansas City). This discounted entertainment pass is a great way to enjoy entertainment for FREE all year long! What Is Pogo Pass?

What exactly is Pogo Pass and how does it work? If you like sporting events, museums, and other entertainment venues, you can get lots of entertainment options for just one low price!

Currently, prices are $99.98, but with the CHACHING promo code, your pass will be $39.99 or $49.99, depending on the city. The pass is good at various venues around your city, each listed on the website.

After showing your pass (which can be scanned or shown on a smartphone), you’ll get entrance for free! Some venues give you unlimited uses, while others have a set amount, also listed on the website. Even if you use the pass just a couple of times, you’ll already make up for the cost.

First, go to pogopass.com and find your city to see the current offers. Pogo Pass is always working on adding new venues, and when that happens they are automatically included in your pass for the year.

Examples Of Local Savings With The Pogo Pass

In San Antonio, you will save money with Pogo Pass when you go to UTSA athletics, San Antonio Zoo, Pump It Up, Witte Museum, San Antonio Aquarium, Buckhorn Museum, Monster mini golf and laser tag, and Rush fun park.

PLUS, as part of the South Central Texas pass you also get access to all Austin/Waco area venues as well. Be sure to use the Pogo Pass coupon CHACHING.

For those in the Dallas/Fort Worth area, the Pogo Pass is good for Hawaiian Falls, Discovery Gardens, Fort Worth Zoo, SeaQuest, Pump It Up, Rough Riders, Dallas Wings and MORE!

** Note – If you have multiple people, each person in your group needs a pass. Fortunately, most of these places don’t charge admission for 2 years and younger, so if that is the case 2 and under wouldn’t need a Pogo Pass.

If you do have small children, you might want to check with the various venues and see what their age policy is for ticket prices.

The Pogo Pass coupon code CHACHING is good for all Pogo Passes regardless of city.

If you are trying to think of a great gift for a special person, or the person who has everything, look into gifting a Pogo Pass! When you buy a Pogo Pass as a gift voucher, the membership does not begin until the gift card is redeemed. 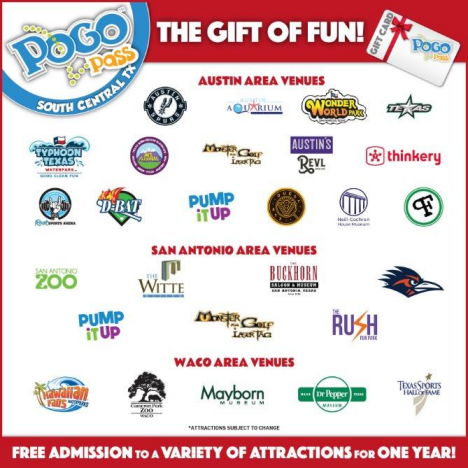 If you have any types of issues, concerns, or questions, be sure to use the chat feature on the Pogo Pass website. You can also check out the Pogo Pass FAQ page to get answers to any of your questions.

Erin is the mother of identical twin girls and their slightly older brother. She is a domestic engineer, and previously had a career leading customer service teams for a major HVAC company. Cleaning without harsh chemicals, and cooking easy and usually healthy meals are part of Erin's daily life. She volunteers with youth leaders, and genuinely wants to help others win. Erin has a degree in Communications, with a focus on Broadcast Journalism.